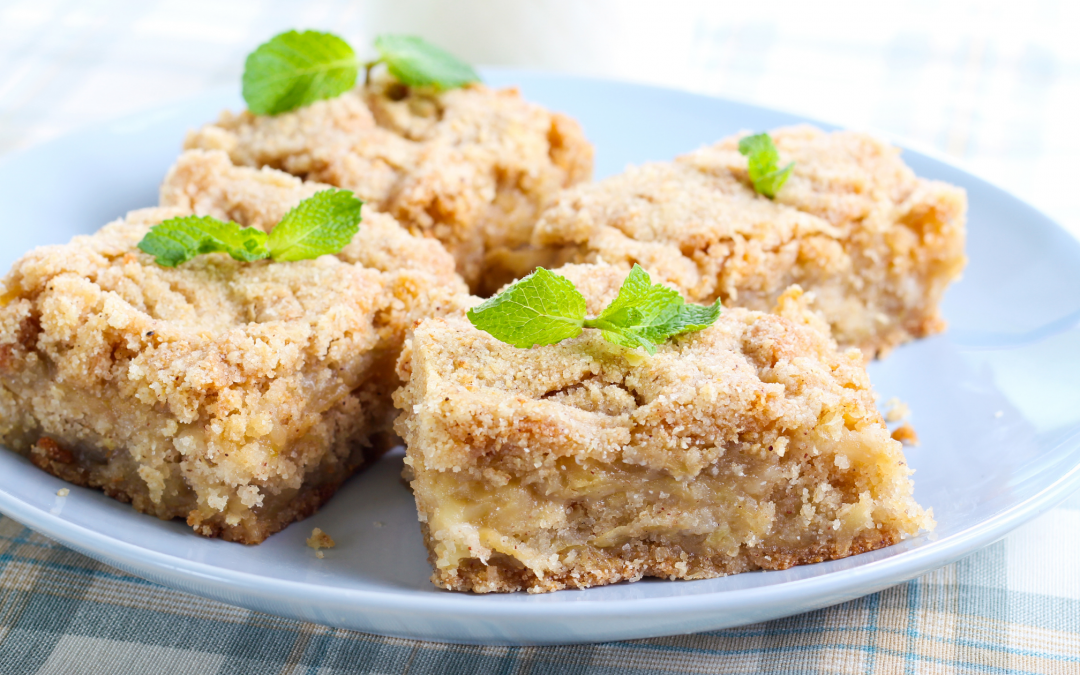 Apples are in season so we wanted to take this the opposite direction of everyone else on the “pumpkin season” bandwagon and instead share a few apple recipes – not that we don’t love pumpkin.

Preheat your oven to 300 degrees F and line an 8×8 baking pan with parchment paper. Be sure to bring the parchment up the sides as it makes it easier to lift out later.
Shortbread Base:
Place butter into a stand mixer and beat on high for 5 minutes or until the butter turns white rather than yellow, that’s how you’ll know it’s creamed. Next mix in the sugar, vanilla, and salt. Once combined, add in the flour and stir well. Press the mixture into the parchment-lined pan and bake in the preheated oven for 15 minutes.
Apple Filling:
In a bowl, combine the apples, flour, sugar, cinnamon and nutmeg until the apples are well coated.
Topping:
Mix flour, ¾ cup of the brown sugar. Cut in the butter and knead together.

Remove the crust from the oven and turn the heat up to 350 degrees F. Sprinkle one half of the Topping over the shortbread, then layer the apples on top. You will have multiple layers so try to keep it level. Once this is finished, sprinkle the remainder of the Topping evenly on top and place in the oven to bake for 30 minutes.

Remove from the oven and allow to cool fully before placing in the fridge to set for at least 2 hours. Once it’s set, remove from the baking dish by lifting out the parchment paper and cut into 16 squares.